The History of the Cross Guns

Avoncliff looks like a village misplaced in time, as though time there had stood still while the world evolved around it … nothing though, is quite what it might appear at Avoncliff”
(N. McCanley – author of ‘Avoncliff, The Secret History of an Industrial Hamlet in War and Peace’)

One of the oldest buildings in Avoncliff, the twin-gabled central section of The Cross Guns is believed to date back to the 1490’s, the central inglenook fireplace being of the same style as those found at Hampton Court.

With the construction of the East wing in the early 1600’s, this Tudor residence became an Inn known as The Carpenter’s Arms. This provided respite for travellers and drovers using the ford across the river at Avoncliff. It was later used by quarrymen, millworkers and travellers.

At the turn of the 18th Century, the Kennet and Avon canal arrived at Avoncliff. The additional trade this generated for the pub necessitated the construction of the Western extension in which the snug was housed. Here, customers would have enjoyed smoking their clay pipes, playing cards, drinking ales and whiskies, partaking of snuff and sharing tales that stretched the length of the canal!

Bargees often visited the pub, stabling their horses behind the old cellar. A local innkeeper found long-forgotten records, revealing that the landlord of the Barge Inn in Bradford on Avon regularly escorted “Ladies of the Town” to The Carpenter’s Arms in order to warm the spirits of the boatmen! The ladies were not the only source of entertainment however, for bargees would often bet each other to climb up the chimney when the inglenook fire was lit. When they reached the top, they were prevented from returning by their fellows who had mischievously stoked the fire!

During the early 19th Century, the clothing firm of Moggeridge & Joyce are reputed to have been licensees of The Cross Guns, in addition to being proprietors of the Avoncliff mills. In response to the chronic shortage of small coinage at the time, they issued tokens exchangeable at the company-owned pub which brewed its own ale for the millworkers. The rural serenity of Avoncliff was disturbed from 1794, when the 9th (Bradford on Avon) Battalion of the Wiltshire Rifle Volunteers was formed and a rifle range established alongside the canal. It was shortly after this that The Carpenter’s Arms was renamed The Cross Guns, both in recognition of the formation of the local Yeomanry and as a salutary warning to rioting agricultural labourers of the time that retribution was close by!

The History of the Cross Guns

20th Century and Beyond

In 1914, whilst the canal was still commercially active, The Cross Guns was acquired by Usher’s Brewery. The local mills and factory were still hard at work and although the surrounding quarries had closed a decade earlier, there was a sizeable workforce of thirsty stonemasons employed at the stone yard beyond the canal aqueduct. In this period also, the patients of the Red Cross hospital at Avoncliff assisted their recuperation with bottles of Usher’s Stout from the pub, much to the annoyance of Matron! 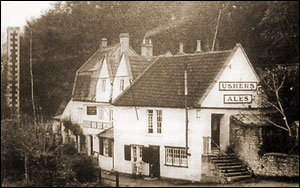 During the Second World War the wealth of both the Queen and the Cross Guns’ landlord were assured. With nearby Westwood Quarry housing the Royal Enfield factory and being used to store the Crown Jewels as well as other national treasures, an influx of factory workers and museum personnel would often call in to sample the pub-brewed ale and keep the coffers full. Of course, American servicemen returning to their Westwood Camp after some much-needed practice at the rifle range would also call in to enjoy the British beer and hospitality!

By the early 1960’s, the Mills were derelict and the canal was dry and in disrepair. The war-time immigrant workers and servicemen had drifted away, the stoneyard was closed and trade at the pub continued to decline throughout the decade. Usher’s considered the pub to be commercially unviable and thus sold The Cross Guns to a private landlord in the late 1960’s.

As we enter the 21st Century, this idyllic 17th Century pub is yet again experiencing a high profile and popularity. As more and more people discover this exclusive location, it is our privilege and responsibility to sensitively restore, and thereby enhance it, for future generations to enjoy. In the spring of 2004, a sympathetic programme of restoration work began to renovate the front elevations of The Cross Guns. The building is architecturally interesting rather than classic in design, and much enthusiasm has greeted the re-emergence of the mellow Cotswold stone. More information on the restoration is avaliable here

“Avoncliff is enjoying a new lease of life and the hamlet is probably busier and more
prosperous than it has ever been” (N. McCanley, 2004)